A note to my readers:

I apologize for spelling and grammatical errors... the posts so far have been initial attempts completed in a hurry... I hope to be flawless in the near future. 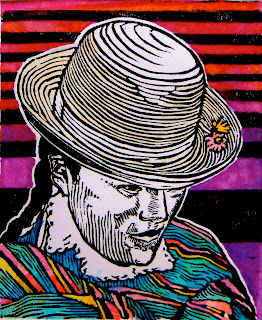 Posted by Harrison at 4:42 AM No comments: 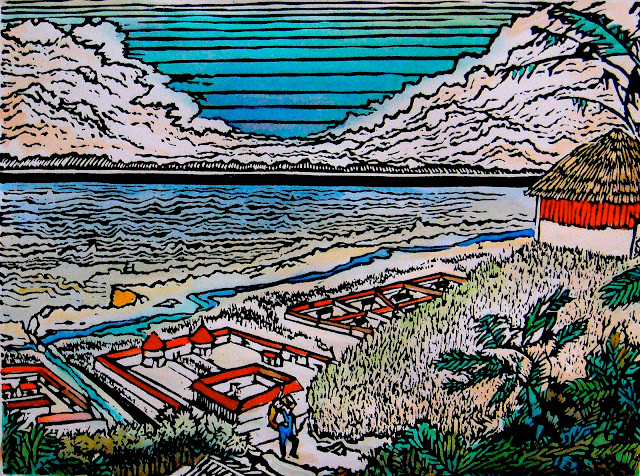 In the small ocean village of Janaghey was born a man of exceptional wisdom. In the years of his youth the village was quite small and existed on the outskirts of the great Inca Empire. The villagers were all fisherman and relied on Moma Qocha, the great ocean, to provide fish for them to trade. But in those early years there was a famine and those who did not leave the village of Janaghey were starving. The boy was the son of a fisherman and went everyday to Moma Qocha with his father to pray for the famine to end and for her to call her children from the sea. As the boy's family grew hungry and there strength began to fade, the boy left the village and climbed the great hill that overlooked the sea. It was there that he planted a few seeds from his family's garden, which had never yielded a single crop. The boy prayed to Moma Qocha to bless his crop and yield food for which he might feed the hungry people of Janaghey.
Moma Qocha heard the boys prayers upon the hill and blessed his crop. Although there was a cloud that hung over the village of Janaghey the sun always shown brightly upon the hill. A year passed and the boy returned to hill and to his surprise there grew a miraculous field of thick and hearty grain. The boy gathered as much as he could carry and returned to the village. The next day he would return to the hill with his family and harvest the grain and feed the hungry people of Janaghey.
Years past and the boy grew strong from tending the crop upon the hill. His family built a large maloca upon the hill and harvested maze, and potatoes. The boys family grew rich and slowly forgot the blessings of Moma Qocha. The family passed into the next world and the boy lived upon the hill alone and grew old.
The village of Janaghey had prospered but many from the village told stories about the old man on the hill. Rumors of his sinility spread throughout the village and soon no one but the tradesman from the village ever visited but to exchange fish for potatoes.
Then one day Moma Qocha visited the village of Janaghey with a terrible tide. Moma Qocha Arghey, she took in a great breath and there was a stillness in the ocean. Then a howling wind and the waves from the shore pulled back revealing the fishers of the sea floor. The villagers of Janaghey all gathered at the shore to watch in awe as Moma Qocha drew back the curtain of the sea. It was only the old man upon the hill who could sea the great wave that formed a still wall of dark blue upon the horizon. He had but moments, so the old man took a hot ember from his stove and ran out into his fields. He lit the crops that had yielded his families riches aflame, then ran to the house that he and his father had built and it to was set to fire. The towering blaze grew high in the air and soon the villagers at the shore ran up the hill to stop the crazy old man from destroying his crops.
It was just then that a tidal wave crashed upon the village and the Janaghey was no more. Yet all villagers were saved, because of the selfless actions of the old man upon the hill. It was that day that he was honored with the title Pacha Janaghey, the living god of the village by the sea.
In the days following the disaster Pacha Janaghey left his home and traveled in the last years of his life into the Jungle to seek the Malka Maya and live forever in the ancestral lands.

Posted by Harrison at 4:42 AM No comments: 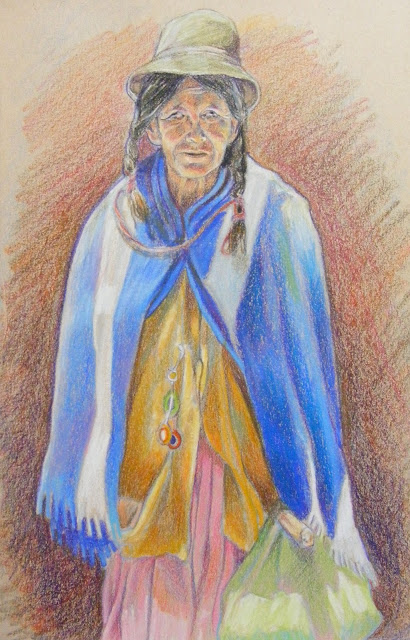 "Muña daughter of the Third Seed" 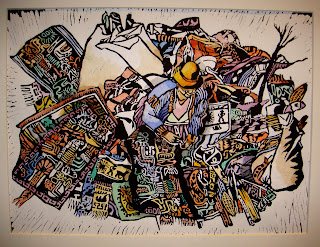 "Muña daughter of the Third Seed":
The sound of the macaws nesting amongst the trees. The creaking roots of the jungle floor, bending to the will of the old growth. Muña, daughter of the first seed, placed her hands across the ancient woven texts, many from the tribes that had lived long ago. Her fingers slowly passed over the stories that had not been read in many years. Stories that are still carried in the sacred winds that shake the leaves and in the the sienna bark of the ceiba tree. Her hand trembled along the worn wood staff, upon which was carved the legend of the traveler, a story which had carried us to sleep many nights before. A multitude had gathered in the shade of the canopy. Only Muña sat in the cascading light of the open days sun. Those who had heard Muna's stories before, had returned expecting to hear her tell of the ancient caves, the sacred fountain of the serpent, or of the great sorcerers of old.  But as she passed over a worn tapestry half caked with dirt and age; her hand stopped. A smile appeared across her face and tears shimmered from the wrinkled eyes that were buried in her massive cheeks. She breathed deeply and after a long sigh she spoke,
"Now we shall speak of the life of Khayiri, whose very name means, "compassion."
Posted by Harrison at 11:42 AM No comments:

"Rio Alma" (the home of Khayiri)

"Rio Alma" (the home of Khayiri):
As Khayiri pulled the patterned linen legs of his pants to his waist, a stray wisp of pipe tobacco streamed through the room catching on the glint of light from the ceiling. The spicy perfume of the tobacco filled his nostrils as he opened the small door leading to the front porch that looked out on the neighboring abandon of Rio Alma.
Posted by Harrison at 11:40 AM No comments:

"A Sky Black with Dark Feathers" 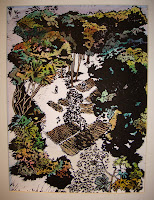 "A Sky Black with Dark Feathers":

...Sa'cha's voice grew thin as he spoke those words, for he knew that darkness had entered the kingdom of Takacharu and that none were spared from the shadows that followed the endless procession of birds overhead...
Posted by Harrison at 11:38 AM No comments:

"The Cave of the Last Chacmool" (Jaguar Demon) 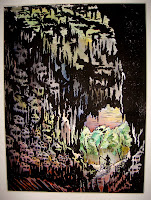 "The Cave of the Last Chacmool" (Jaguar Demon):

I remained in the pitch dark moving slowly, deeper into the cave, following the stone steps that seemed to go on endlessly and were made slick at points by black mold and small brown pools of drying blood. The wall of a the cave glinting in the torches flame. Strange writing carved all along the walls, written in the dark caves by ancients who knows how long ago. Then as I traveled a few steps further, I froze at the sight of a massive jaguar head peeking out from the wall of the cave. My heart became solid as a stone, my hair as straight and rough as a boar. I backed away preparing a striking stance but the jaguar did not move, it did not breathe, its gleaming eyes were stone. I quickly stepped forward to try to scare the jaguar into movement but realized that the head was carved into the cave wall and further into the cave hundreds of jaguar heads were hewn, bearing their stone teeth. A deep fear mixed in my belly, for I knew that this cave must be a sacred cave to the ancient Pacha Chuyru home to the Chacmool the greatest and most feared of the red jaguar.
Posted by Harrison at 11:34 AM No comments:

"The First Seed":
"I... I miss your mother and father dearly. Our family was... What happened to them was terrible.... Sometimes I feel a sadness creep into my heart and freeze the blood that warms the core of me. The sorrow swallows me completely and I am overcome by despair. But I see myself in the pools of the river and the sadness doesn't show anywhere on my face. Just a lack in my eyes that echoes the vacancy in the chambers of my aging heart. I feel hollow on the outside like a tree stripped bare of all its bark, each moment growing towards the sun but rotting from my outside..." (Rikoj's lament)
Posted by Harrison at 11:30 AM No comments: 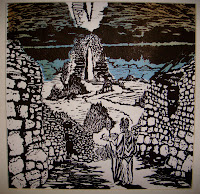 "Huaca Kunjulat and the Gate of Pahasqa Ñan":
A tunnel formed in the raging river that led down to the river bottom. The mud spreading under his feet as he stepped down into the depths of the water....
"...From this gate will pour an ocean of rock that will carve the land and create a passage. For any who are destined to travel it to the heart of the earth, which draws its breath from the great jungle, shall live free from war for all time." And on the final step was written, "Once opened Pahasqa Ñan will be a scar in the earth from which will bleed death in the names of each stone written upon its foundation. For those who are not welcome to travel its passage risk oblivion."
...Upon each stone was writ the name of a dark creature, at that time unknown in the world of man. Words like scorpion, fire ant, panther.... And as Huaca Kunjulat raised his arms to the massive gate each stone fell and shattered into a thousand pieces which then turned magically into the beast and sank into the mud of the river and would rise again in the roots of the jungle.
Posted by Harrison at 11:28 AM No comments:

...One day the young boy went by Intiwaney's house while she was away with her family. Chikiray rubbed small seeds into grain of the wood floors and walls of her house. When Intiwaney returned from the long day of working the fields in the hot sun, she fell straight to sleep. In the morning she awoke to the smell of a thousand budding blossoms that had grown in the night and blanketed her house with sweet smelling white flowers. Even compared the tremendous beauty of the lands of the Malka Maya Intiwaney had never seen such wonders. She ran to the home of Chikiray and wrapped her arms tightly around his chest. Chikiray had almost forgotten what he had done to deserve such a greeting and then his absent mindedness gave way to a surprise of happiness and love. He embraced Intiwaney and for the first time in their youthful bonds sprung free and met with a kiss...
Posted by Harrison at 11:24 AM No comments: 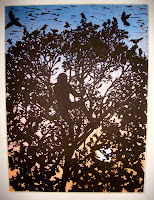 "The Singing Tree":
...Chikiray climbed the limbs of the ceiba tree and spoke softly into the knotted wood. The creese of his palm kissed the twisting bark and a dew formed under his finger tips. A sweet smell lifted into the air from the swaying leaves that made the sound of a gentle rattle. Then the sugary calls of brightly hued birds darted from branch to branch and finally united in song...
Posted by Harrison at 11:21 AM No comments:

Chikiray and the Singing Tree 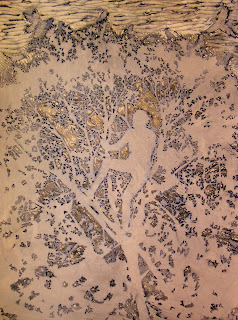 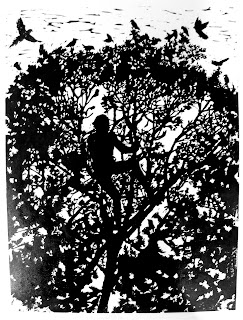 Posted by Harrison at 1:49 AM No comments: